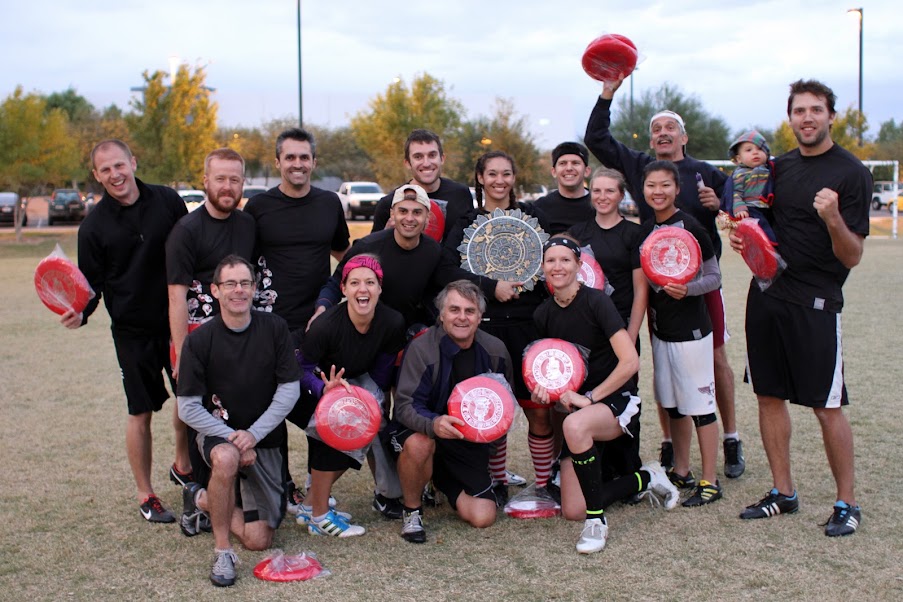 More Playoffs Photos by Stephen So

Hello VOTSlanders, and thank you for another great Fall Season. You all made this a great finish to the season with Saturday's playoffs. Congratulations to Blackout for winning it all!

Also want to congratulate Doom Shaka Laka for a hard fought second. The finals was quite enjoyable, even with the wind increasing and the temperature decreasing. Brrrrrr, it got cold watching from the sidelines.

Doom Shaka Laka and Ragnarhuck rolled, going undefeated in their respective pools. Blackout and NostraDomination had to squeak through and get some help.

NostraDomination won their first game of Saturday and had to play a tough Tikal Taco Stand, who was missing Angie Xiong (potential game changer). Tikal lost in their first game Saturday against Dark Slime. So for Tikal to make it to Semi's they would need to beat Nostra. If Dark Slime lost, then Tikal would just need to win. But if Dark Slime won, Tikal would need to win by 6. Dark ended up winning and Tikal actually beat Nostra, but just not by enough :( So NostraDomination made it to semis.

Blackout had their own backdoor to make it to Semi's. They also lost the first game against Tropical Storm so needed to beat Hucking Kangaroos by 3, if Tropical Storm won again. TS did win, and Blackout did win by 3, so snuck in.

Semis (These were some awesome semis)

Nostra versus Doom: This was a close game throughout, until Nostra took a 13-9 lead late. Doom turned things around and down 13-12 and the hard-cap horn sounding, Doom scored to tie, and then got the D and scored to win on Universe! What a comeback, but maybe the effort took a lot out of them...

Ragnarhuck versus Blackout: Ragnarhuck was well-rested and came out strong. Blackout had to rush just to get started on time. So Ragnar came out to an 8-0 lead. It's over right? Wrong. Blackout found something extra deep in their respective bellies and fired it up, making a huge comeback and winning 12-11 at cap. Wowza, I know.

Early polls had Doom by 4 in this game, thinking their team speed and handling in the wind would make the difference. Early on it seemed like the prognosticators were going to be right, with Doom coming out to a 3-0 lead. But wait, here come those wily Blackouters! They made their own run to tie it at 3s and 4s. Then they started to pull away while Doom started turning the disc over with some extra-aggressive plays that had worked before. But the beast that is Pat Nardi was swatting away every deep throw made toward him. Blackout took half 8-5 and had a lead of about 11-5 or 11-6. Doom wasn't going to go quietly into the ever-cooling and windier night (with drops of rain falling) as they made a comeback to get it close. But, as twilight loomed and hard-cap coming on, Blackout held on to win 14-12 with Doom scoring the last point (I think that final score is accurate). What a game. Excited for next league!

Paul Otto ran a weekly Pick 'Em all season long and Fantasy Ultimate during finals. Here are the results from Paul:

After 91 games in Fall League and about 50 people participating in Pick'em over the course of season, we have a clear winner. Blackout's surprising championship (nobody picked them to win it all) meant that few people scored well. Our winner was the only person to correctly pick all 4 pool winners (and also the only one to pick both finalists), plus he was leading the standings before playoffs began. So congratulations to our winner, Bill Christensen! Here's the final leaderboard:

In a finals game that featured 58 turnovers, scoring positive points was sometimes a challenge. Congrats to the overall top scoring fantasy player, Ryan Blackman, with a whopping 9 points! Ryan also led all players with 4 goals; Bret Engstrom led with 5 assists, and Dustin Udall led with 4 Ds.

Thank to all 47 people who participated. Look for Fantasy Finals to be back next spring... but I'll need someone else to keep score, since I'll be playing in finals!

Pool Round 1 will take place at regular T/R game times during the week of November 6th.

All games at Tempe Sports Complex.

The same as General League Rules with the following exceptions:

If you have any questions, please contact the director.